Where the Title Comes From – Mr. Veeck 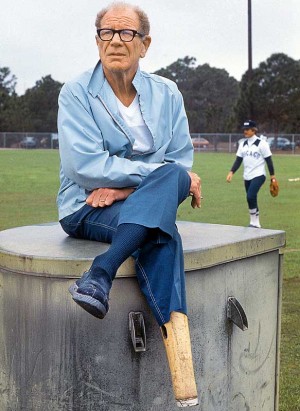 Baseball legend Bill Veeck sometimes said, “I am the only human being ever raised in a ball park.” He owned several ball clubs and used an amazing sense of humor and playfulness to make the act of attending a baseball game, even one in which the home team lost, into a joyful enterprise.
Whether dressing up players as invaders from another planet, handing out cue cards to the fans so they could decide the next team play, or having fireworks explode over the scoreboard, Veeck made sure that those who came to the ball park had a great time. Even the contests were fun for all. One fan was the “lucky winner” of a 200 pound cake of ice!
Veeck had lost a leg in World War Two, and applied the same have-fun-anyway philosophy to his loss. He even had an ashtray built into his wooden leg!
“Suffering is overrated,” he is quoted as saying. “It doesn’t teach you anything.”
He brought his enjoyment of life into enjoying making the world a better place. He brought the first African-American baseball player into the American League, and participated in civil rights marches and meetings.
It is from his philosophy that the title of this website is respectfully dedicated.