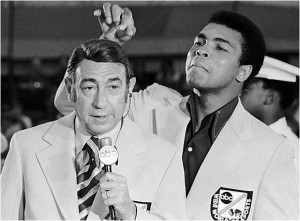 When his flight was preparing to leave, an airline attendant reminded Muhammad Ali that he, too, needed to fasten his seat belt.

“The tragedy of human existence is not death—it’s unlived life.”  Irvin Yalom

To be a human being is to experience loss-however much or how little these necessary losses are perceived by others, we must come to grips with physical loss, emotional loss, and losses of hopes and dreams throughout our lifetime. How we approach that can give life more meaning or take its meaning away. Different people interpret their losses in a variety of ways.

To some the losses reinforce feelings of hopelessness and loss of control.  But others reported that, though their loss was never wished for, used it in positive ways.

As writer Samuel Pepys realized only certain days of any week would he feel unrestrained by health problems, he resolved to live each day he felt halfway well as fully as possible (often to the dismay of Mrs. Pepys).

As Yalom says, we can use our increasing sense of mortality and the losses we experience along with the way to more fully embrace each day.  Trying to visualize this idea– of coming to terms with our loss with humor and grace, while remaining safe and approachable to others–make me think of Muhammad Ali.

Watching the videos of the young Ali in and out of the boxing ring  is a truly amazing experience. The feature documentary When We Were Kings shows  Ali at his most outgoing, embracing both his physical skills as a boxer and his verbal skills through which he brought humor and comic exaggeration to boxing celebrity.

Though the world first saw Muhammad Ali as an amazing athlete, I responded to him as a humorist, who “played with” the role of being a boxer.  He didn’t just box—he created Humorous Poetry.  Predicting victories in the ring, he created the following poem:

“If you think the world was surprised when Nixon resigned,

Wait till I kick Foreman’s behind.”

At age 20, he recited his poems while doing pushups. As sports writer AJ Liebling wrote: “He is probably the only poet in America who can recite this way. I’d like to see T. S. Eliot try.”

He wrote the following poem before his first fight with Sonny Liston: predicting a punch that knocks his opponent out of the ring and into the sky:

And the ref wears a frown,

For he can’t stop counting

Till Sonny comes down.

The crowd is getting frantic.

But our radar stations have picked him up

He’s somewhere over the Atlantic

Who would have thought

When they came to the fight

That they’d witness the launching

Of a human satellite?”

He created Tall-Tale humor about how he trained for his fights:

“I done something new for this fight

I done wrestled with an alligator

I done tussled with a whale

Only last week I murdered a rock

Injured a stone, hospitalized a brick,

I’m so mean I make medicine sick! And I’m fast!

Last night I cut the light off in my bedroom

I hit that switch and was asleep in bed before the

Part of his humorous boxing celebrity style was playful bragging and comic exaggeration. His motto was: “I am the greatest.” Once a reporter asked how he was at golf. “I am the greatest golfer too…I just haven’t played yet.”

Today Muhammed Ali is coping with the challenges of Parkinson’s syndrome. The voice that never seemed to stop talking is today soft and slurred. The hands that won world boxing championships now tremble. The body that proved so strong in the ring now loses energy easily.

To be a human being is to experience loss. We may experience physical

losses, when health declines, emotional losses, and (because we think about our life and our future) losses of possibilities, too. How do we know we are still ourselves after such changes?

D. W. Winnicott has a great term: “going-on-being”. What is continuous in us despite our outer and inner losses and changes across a lifetime? One way we go on being is to find meaning in our lives, as Viktor Frankl has shown us.  With meaning we can transcend the most difficult and challenging of human experiences. Ali, who in his days of health so often said, “I am the greatest” found meaning in his later illness. “I needed to become sick to remind me that I too am just a man.”

He described himself as having a greater sense of religious faith. “Being sick, I don’t chase girls any more. I have a better chance of getting into heaven.”

For Ali, humor has been a source of continuity throughout his life. He had

“played with” the role of being a boxer with poems, comic insults, and predictions. With illness, he has moved from an aggressive humor to a more gracious and generous humor, a compassionate humor that acknowledges his and our common human frailty.

Now he “plays with” the role of being a patient. He has gone from verbal humor to silent comedy.  In conversations, he will pretend to fall asleep, and then when others are convinced that he is soundly sleeping, punch out, while his wife explains ‘oh yes, that is part of his condition.” Then Ali will open his eyes and burst out laughing. As John Morreall has written in his brilliant book Taking Laughter Seriously: “Humor in its highest form can be used as a social lubricant, allowing us to interact with others, despite our differences and our fears and our assumptions.”  Ali’s humor now acts as a social lubricant, helping put others at ease and helping them see that he is far more than the illness that he is coping with. 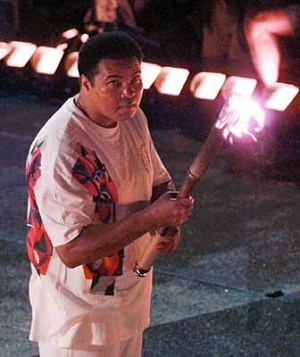 Several years ago, when Chicago’s Marshall Fields store was still called Marshall Fields, I stood in line 2 hours to meet Muhammad Ali. It was perhaps the best investment of 2 hours in my life. InThe Muhammed Ali Reader, David Maraniss summarizes some of the implications of the magic tricks that Ali takes with him now into every encounter; “In part it is just Ali amusing himself with magic tricks that he has been doing over and over for many years for anyone who comes to see him. But he is also, as always, making a more profound point. He has transferred his old boxing skills and his poetry and his homespun philosophy to another realm, from words to magic. The world sees him now, lurching a bit, slurring some, getting old, trembling, and recalls that unspeakably great and gorgeous and garrulous young man that he once was. He understands the contrast. But, he is saying, nothing is as it appears. Life is always a matter of perception and deception—Life is a trick—and he always shows how his tricks are done. He are done, he reconfirms for us ‘how easy it is to be tricked.”

In David Remnick’s biography King of the World, the author asked Ali how he’d like to be remembered: “I’ll tell you how I’d like to be remembered; as a black man who won the heavyweight title and who was humorous and who treated everyone right.” Continuing his rather lengthy list, he concluded: “And if all that’s asking for too much, then I guess I’d settle for being remembered only as a great boxing champion who became a preacher and a champion of his people.” And concluding with one more humorous self-mocking jab, he added: “And I wouldn’t even mind if folks forgot how pretty I was.”

As Gerald Early wrote in The Muhammed Ali Reader: “Ali has come to instruct us all in how to achieve a gracious humor in whatever roles we play, and whatever losses we experience.” And, as existential psychology reminds us, our losses and the idea of our losses can be used to used to live each present moment more fully and with greater generosity and gratitude.

Broyard, A. (1992). Intoxicated by my illness. New York: Fawcett Columbine